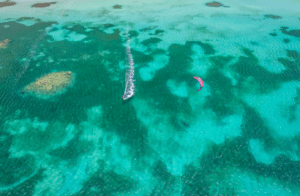 Get ready and fired-up kiters, here are the 2022 best kitesurfing spots in Dominican Republic, and there’s a new number 1 in the country. Across this beautiful island, there are miles of perfect beaches and epic coastline just waiting for you. But as weather conditions slowly change and tourism makes its impact, the best places to kitesurf are also changing.

The new number is Las Terrenas. Voted time and time again as the ultimate destination for kiters because of two major reasons: the area has huge expanses of flatwater with constant winds, and the tourists mainly holiday further south, which means they don’t crowd the beaches of Las Terrenas.

Experienced kiters know the value of uncrowded flatwater. There’s nothing worse than trying to avoid a sea of kites. The idea of kitesurfing and kiteboarding is to be free and unhindered. Las Terrenas has the best winds, the best bays, and best water conditions. The winds here are thermal and start to pick up in the afternoon, lasting into the early evening, with between 20 to 25 knots from December to September. These beautiful and uncrowded beaches invite you to kitesurf for hours across the vast expanse of ocean.

Las Terrenas made number one on the list of 2022 best kitesurfing spots in Dominican Republic for a few other reasons too. Like the warm air and water temperatures, making it pleasant to kitesurf without a wetsuit. Second, this area is very easy to get to. There are good roads connecting to places like Samana Bay. And of course, kitesurfing isn’t the only adventure activity in Las Terrenas. Plenty of kiters also partake in Dune Buggies and Zip lines. See: Top things to do in the Dominican Republic in 2022.

Slipping down the list is Cabarete, falling out of favour amongst professionals and beginners alike. Kitesurfing in Cabarete in the Dominican Republic has been a world-famous mecca for years. However, the crowds have made finding a section of beach to yourself quite impossible.

Don’t get us wrong. Cabarete is great. Though perhaps not how it used to be. This town on the north coast has a variety of conditions from the flat water beach called La Boca, to the waves at Playa Encuentro. There are good winds from December to September. Some locals feel the conditions have changed a bit over the years too, and are maybe not as favorable as they once were.

There are two main locations in the area: the main beach/Bozo beach, which can often be choppier and sometimes gusty. Then there is Kite Beach which can be crowded but is generally less choppy with stronger, more stable winds. Just outside of Cabarete you also have Encuentro surf beach to the west – great place to downwind to – as well as La Boca which is a flat river spot that is popular with the pro freestyle guys.

A reef surrounds the shallow waters of this fishing village, blocking the waves and creating flatwater conditions that are also perfect for beginners. First timers can pick up the basics of kiteboarding in nine to twelve hours of lessons. This is not the case for everyone, but if you have done any sailing or have some snowboarding experience, you’ll be at a definite advantage.

We rate this as a great spot for kitesurfing because of the conditions and lack of tourist hordes. Buen Hombre has preserved its rustic Dominican Culture, unspoiled by tourism. Here you can live the surf-style, eat fresh seafood, drink rum, and live right on the beach. On average, Buen Hombre has 6-10 knots more wind than Cabarete.

In the summer for 3 months the wind averages 25-35 knots. The water is flat and shallow and ideal to learn and practice your tricks. Definitely one of 2022s best kitesurfing spots in Dominican Republic.

Punta Cana gets an honourable mention at number four on the list. Punta Cana is not per se a kitesurf destination, you might be able to kitesurf if you are lucky and are there between November and December. Then you can catch some wind created by the winter depressions. You will find slightly more wind going up around Uvero Alto.

Punta Cana being such a popular destination, it makes the list of 2022 best kitesurfing spots in Dominican Republic because the likelihood is that you will pass through the town at some stage on your journey. Know that if you can stay in Punta Cana, Kiteworld can organize either a day trip to Las Terrenas, the closest kitesurfing spot, or plan to spend a few days there.