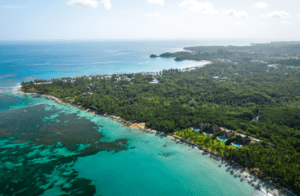 Kiteboarding Las Terrenas – one of the best places for kiteboarding in the world. With miles of pristine coastline, there are waves, wind and flatwater for all riders. With endless sandy beaches and flatwater everywhere, kite enthusiasts get tropical, subtropical and temperate climates depending on the time of year.

The varieties of wind speeds make kitesurfing ideal. And, it’s fair to say that up until now Kiteboarding Las Terrenas has stayed off the radar of mainstream adventures and travellers who reach the Dominican Republic because places like Cabarete have been heavily promoted, making them far more well-known. That has been a good thing, right? It has meant that kiteboarding in Las Terrenas has remained one of the best kept secrets. Less tourists have meant that the area has been a hidden paradise for advanced kiteboarders and beginners alike.

That all changed by 2017 when a series of news articles about pro-kiteboarders rating Las Terrenas as their top kiteboarding destination hit the mainstream. This catapulted Las Terrenas onto the world map. Though it did not translate into an influx of tourists immediately, probably because 2020 and 2021 were non-travel years that we would all rather forget thanks to you-know-what.

This means you can experience Kiteboarding Las Terrenas without the big crowds. Kiteworld has private kiteboarding lessons for families, kids, and advanced riders across spacious coastlines where you don’t have to fight for a spot on the beach or in the water.

Beat the crowd – Make a Booking

Las Terrenas for families and adventurers

This beautiful part of the world offers something for everyone. Windswept beaches call to experienced adventurers as the waves and wind create a kiteboarding paradise. Whereas, protected coves allow new riders to get their feet wet without the worry of big waves or harsh winds. We find great new locations all the time. The coastline is endless and great for exploring. Kiteworld is the only ENGLISH speaking kiteboarding school in Las Terrenas, making Kiteworld the obvious choice for travellers from American and Europe.

Most people already know they want to add some adventure to their holiday long before they leave their home countries, but often they stumble upon kitesurfing as an option at the last minute, or when they arrive in the Dominican Republic. It is never too late to secure a lesson at a kiteboard school in Las Terrenas. You can check out some of the booking options on this page.

Kiteboarding Las Terrenas – what to expect

Las Terrenas is in the Dominican Republic, located in the province of Samaná. There are just under 14,000 people living in the area, a coastal city with an average temperature of 25 °C (77 °F). Vincent and the team from Kiteworld will help you organise your transport to your accommodation in Las Terrenas, then later help you get to the surf school itself.

Everything is in close proximity. You will not have any problems with getting around. Kiteworld takes great pleasure in sharing the passion for kiteboarding with all generations, particularly with kids and teens who will become the future of this relatively new sport.

Las Terrenas in the Dominican Republic is fast becoming known as the most beautiful kiteboarding destination in the Caribbean. The crystal-clear blue, calm water, along with white sandy beaches and consistent wind, make it a perfect spot for kite surfers of all levels. You will witness beauty as you hit the water and glide across the ocean. Wind conditions are optimal for kiteboarding from December to August.

The staff and instructors at Kiteworld were professional, helpful, flexible, and just plain fun. With plenty of quality equipment and local knowledge, you will have an exciting day out on the beaches of Las Terrenas, followed by drinks once you have completed your session.

As you can see from the picture above, the accommodation tends to be right on the beach, and right next to the action. Most travelers and families pack light for their trip, opting instead to hire or buy their kitesurf gear once they land in the Dominican Republic. Though, some professional kitesurfers will bring their own equipment to Las Terrenas. Here are some helpful links when planning your trip: